WUMT Does Updates When WU Can’t or Won’t

Late last month, I wrote a blog post about Windows Update (WU) Alternatives. Little did I know at the time that one of the tools I wrote about would so soon save my bacon. I’m talking about the Windows Update Minitool, aka WUMT. I learned this morning that WUMT does updates when WU can’t or won’t handle them. In this case, I’m talking about KB3201845 a Release Preview cumulative update to the Current Branch build.

First, I tried downloading that update through the usual means, and the download hung at 90% complete. Two more tries left me hanging, first at 45%, then at 0%. Realizing I was heading in entirely the wrong direction, I next downloaded the catalog element for KB3201845. I didn’t get it from the Microsoft Update Catalog (can’t find it there yet); I got links from TenForums.com (x86, x64). Because that cab file wasn’t self-installing, rather than find and use an installer, I turned to WUMT instead. 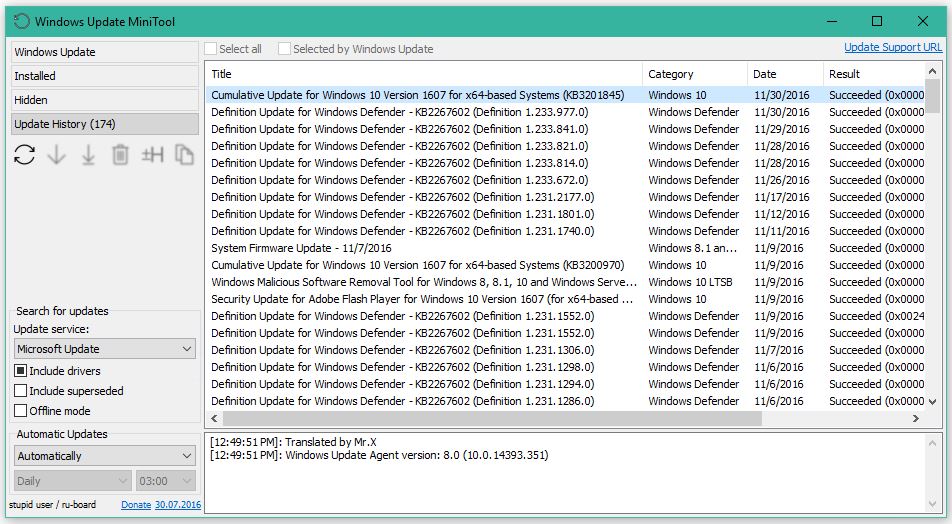 The ultimate outcome shows up as “Succeeded” in WUMT’s Update History.
[Click image for full-size display.]

How Is It that WUMT Does Updates When WU Can’t or Won’t?

Apparently, because WUMT accesses Windows Update servers independently, it can complete downloads and installations when WU is either blocked or misfiring. Though it took 3-4 minutes to download the ~937 MB that KB3201845 occupies on disk, it was able to complete that task on the first try. It also took some while to complete that installation, especially when factoring in the prep-before-reboot phase (5 minutes) and a longer-than-normal bootup sequence (5 minutes) that followed. But it did do the job, and nicely at that.

Assiduous Windows admins and power users will want to grab a copy of this free utility right away, which is available courtesy of the great guys at MajorGeeks.com. It’s already proved its worth in my toolbox. Why not let it do likewise in yours? If you need further inducement, it also works with Win7, 8, and 8.1 as well as 10.