I’m working my way through a box of failed laptops right now. My sister sent them to me over the holidays, so I could make necessary repairs, where feasible. Right now, I’m batting one for three, but hopeful that I might make progress on the other two soon. I just upgraded one of them from Windows 7 to 10. It’s an HP Pavilion Dv6 with a quad-core mobile CPU, 8 GB RAM, and a 128 GB SSD. This is the machine that tells me that Win7 still activates Win10 as of 2/27/18.

How I Know Win7 Still Activates Win10, Even Today

How do I know this? I just used the Win7 key from that laptop’s COA sticker to activate Windows 10. Just for grins, I tried a few old Windows 7 keys I have laying around from older test machines. Same result: they worked, too. For some odd reason, this pleases me no end!

I’m now in the process of rebuilding the runtime environment on the HP to put it somewhat back to rights. I’ve already run Ninite to install Chrome, Firefox, 7-Zip, CCleaner, IrfanView, Java, and various other odds’n’ends. I’ve just added 8GadgetPack to bring my beloved gadgets back, and will probably tinker with it a bit more before I pack it back up to send it back to my sister. So far, while the Dv6 does run pretty warm, it seems to be working just fine. Not bad, for an 8-year-old PC, if somewhat underpowered by today’s standards. I’m going to open it up and blow the innards out with compressed air, in hopes of bringing those temps down somewhat. It’s also going to get as thorough a wipe down/clean-up as I can give it, too. 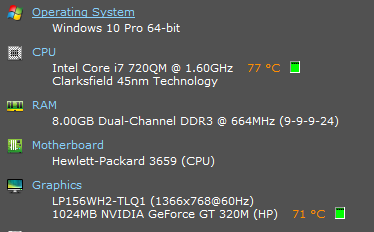 What About the Other Machines?

One of them is a 2010-vintage MacBook Air, for which I have a “Genius Bar” appointment on Thursday afternoon. I can’t really say much about it one way or another, because I haven’t messed with any Macs since I sent this one to my niece for her birthday 4 years ago. Here’s hoping that those geniuses live up to their appelations when I come calling at the Apple Store in a couple of days. We’ll see.

The other PC is a 2010-vintage Dell XPS 12. I haven’t been able to make it run an OS or boot into WinPE or the Win10 installer (any installer). I just got an error message that says it can’t recognize the power brick, so I’m starting to imagine we’ve got juice problems. I’ve tried WinPE, WinRE, the Win10 installer, Kyhi’s rescue disk, and the Macrium rescue media, and have never gotten past the spinning balls. I’ve ordered a new power brick (for a whopping $27, I can afford that experiment) and am hopeful that when I plug it in, it might do something helpful or useful. Again: we’ll see!

I’ll keep noodling away at this stuff until I convince myself it’s not worth the effort, or I get things working. That’s the way the family IT service generally goes, here at Chez Tittel. If any of you fellow nerds have some tips for me to make the XPS 12 work, post your comments here. I’m definitely in need of some inspiration or suggestions. Whaddya got?