OK, so I’ve been watching Windows 7 market share numbers climb steadily month after month, ever since its general availability date in October 2009. Here’s what the latest marketshare distribution looks like for March 2011, according to NetMarketShare.com:

But as the saying that Mark Twain popularized in 1906 as “There are three kinds of lies: lies, damned lies, and statistics” would have it, numbers can be diced and sliced in an infinite variety of ways. That’s why I read the following ComputerWorld headline this morning with great interest and eventual bemusement “Windows 7 share tops XP for first time in US.”

Here’s one line from that story that says it all, with tongue-in-cheek homage to the “three kinds of lies” epigram: “In the first 10 days of April, Windows 7’s average daily share was 32.2% as measured by StatCounter, besting XP’s average of 30.7%.” Later on in the same story ComputerWorld fesses up to relate: “Data from rival metrics vendor Net Applications paints a less-impressive [Ed remark: and more consistent with NetMarketShare.com] pciture for Windows 7. Net Application’s March numbers put Windows 7’s global usage share at 24.2%, compared to XP’s 54.4%.

The key issue here, of course, is the source of the numbers involved. The graph at the head of this blog comes from all over the world, and StatCounter’s report is focused purely on the United States market.  StatCounter’s explanation for the difference, as relayed in the CW story is: “Because China accounts for a major chunk of all computer users and because a higher percentage of Chinese users run Windows XP than those in virtually every other country, Net Applications’ XP numbers are higher than StatCounter’s.” And you can’t get NetMarketShare (or its parent company, NetApplications) to disclose market share data by country without a for-a-fee “geolocation upgrade.”

But this contrasting graph from StatCounter, which clearly shows the crossover point between Windows XP and Windows 7 in the US occurring in early April (dark blue and light yellow lines), does give some credence to StatCounter’s reporting. But without independent and reliable confirmation, I can only treat this report as suggestive, rather than conclusive. Even so, Microsoft should be taking great cheer from these numbers, while also hoping that the Chinese legions get on the upgrade bus before the end-of-life date for XP in 2014. 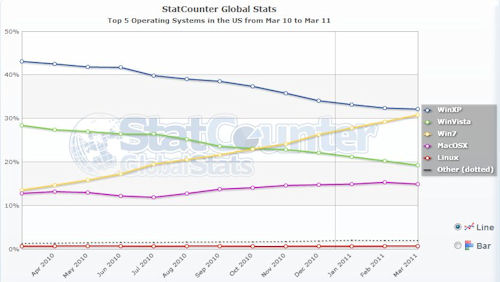