Almost forever, I’ve been a big proponent of the “clean install school” of Windows upgrade methodology. That is to say, rather than upgrading my systems from an older Windows version to a new one, I’ve been mostly inclined to blow away the older install in favor of a new one, followed by the added effort of reinstalling all my applications, restoring settings manually, and so forth and so on. What’s guided my activities has been the belief that this results in a leaner, more stable system, and reduced time to complete the overall installation process. And FWIW, many Windows experts — including the likes of Ed Bott, Paul Thurrott, and Woody Leonhard — have all voiced opinions or advice more or less in keeping with this approach. 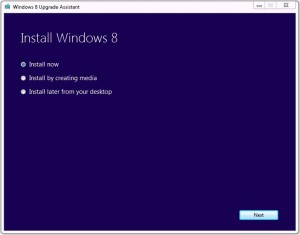 Off to the races, on my way to completing an “in-place upgrade” from Windows 7 to Windows 8.

But with the impending release of Windows 8.1 as a free upgrade for PCs already running Windows 8 on October 17/18, I’m prepping my PCs currently running Windows 7 — for which I purchased the $40 Windows 8 upgrades last year, when MS ran what still looks to be a “once in a lifetime” dirt cheap promotion to get people to move up from 7 to 8 — by upgrading them to Windows 8 in advance of the upcoming GA date. As an experiment, I’d planned to perform an in-place upgrade of my Windows 7 production desktop this weekend, with all of its 237 applications (as reported in Secunia PSI for that system) coming along for the ride.

Finding myself with some unexpected idle time yesterday afternoon, I decided to run the upgrade a bit sooner than planned. This blog post recounts my observations and experiences along the way to the successful and surprisingly smooth conclusion to that process (I’m writing this blog right now on the upgraded PC, which has shown no signs of outright weirdness or flakiness since the upgrade completed at around 5:15 PM yesterday afternoon, following about two hours of upgrade activity). I began the process by capturing two image backups of the original Windows 7 system: one using the built-in image backup captured in the Control Panel Backup and Restore utility, the other using Acronis True Image Home 2013 with the added precaution of creating a bootable UFD with the ability to restore that image to its original drive. I’d already replaced CPUID HWMonitor 1.18 with the Pro version, and uninstalled DualBootPro, Nvidia GeForce Experience, and VirtualCloneDrive to take cognizance of the pre-install warnings courtesy of the Windows 8 Upgrade Assistant beforehand.

The Upgrade tool downloaded the Windows 8 ISO from the Internet to start off the process, an activity that consumed about 24 minutes overall (I didn’t know how to point it at the local ISO copy I already had on one of my 2 TB  conventional HDs, and didn’t bother to research those details, though I do see a very good discussion of this process on Windows EightForums). This approach did have one benefit that saved me from myself, however: using the MS-provided installer I obtained when I paid for the $40 license last year apparently had the product key baked into the installer, so my oversight in neglecting to store that key on another system (it currently resides in my Outlook PST file on that very PC) didn’t impede the installation process in any way, shape, or form, to my great relief and delight. Here’s how the rest of the timeline for the overall install process shook out (all times are approximate, based on my glancing over to my laptop where I relied on its system clock for rough-n-ready timing info, rounded to the nearest minute):

There were six (!) reboots during this process, one during the second step above, and between each of the next three steps, with the fifth one following installing apps, and the final one after the massive update installation that concluded the overall actual upgrade process. I didn’t hit any snags along the way, nor any serious hiccups or delays. Once this process was complete, I fired up DriverAgent to observe that it now reported 5 out-of-date drivers — an interesting improvement following the upgrade, because it had reported six out-of-date drivers (all either bogus or insoluble) for the previous Windows 7 installation resident on that machine. After about one hour of downloading files and fiddling about with them, I got the number of out-of-date drivers down to one, a considerable improvement over my “healthy status” on the prior Windows installation. It is for a “motherboard resources” item in the “Disconnected Devices” section for which DriverAgent supposes that a 2010 vintage version of the Intel Extreme Tuning Utility will address the issue. However, I’ve got the latest (2013) version of that utility already installed on this PC, and because it addressed all other items related to the Intel Thermal Monitoring devices to which the out-of-date finding attaches, I’m of the opinion that this is a false negative (“bad driver”) report from DriverAgent, rather than a genuine and fixable “bad driver” report from the utility. Case closed!

Summary, Observations, and Conclusions
Now that the process is over and done with, I understand that the process of recognizing, handling, and accommodating applications adds considerably to the Windows 8 install process, and the time required to complete it. The usual 15-18 minutes for a clean install zoomed to 65 minutes or thereabouts once my sizable collection of 200-plus applications entered the picture. Soluto reports that my boot time went up from 0:55 to 1:55 following the upgrade (something that I plan to investigate and whittle away at, if I can). But otherwise, the system is running well, my applications are working (at least, all of those I’ve checked so far), and if anything, seems more stable and responsive than it did when running Windows 7. I’ve installed Start8 to help me work on the desktop more effectively (that’s where I spend 90-plus percent of my time on the system anyway), and RecImg Manager to capture Windows 8 snapshots as backups for use in the Windows 8 “Refresh your PC” facility. Since I’ll be using this system every day henceforth, count on me to report further if and when any glitches or gotchas should make themselves known to me. But “so far, so good” is how I’d sum up my experiences so far, much to my surprise.