The latest version of Windows 10, 1803, made its public debut on April 30. By May 9, I’d already published a blog post here entitled “Bring Back Basic Win10 1803 Networking.” It recited some relatively sure-fire methods for restoring LAN nodes to visibility in File Explorer. But the complaints about simple networking have continued unabated online at TenForums, SuperUser, social.MS and answers.MS. As of late last week, Microsoft Agent Justin Emb of MS Answers offers 1803 networking resolution. Here’s a snapshot of his June 21 response: 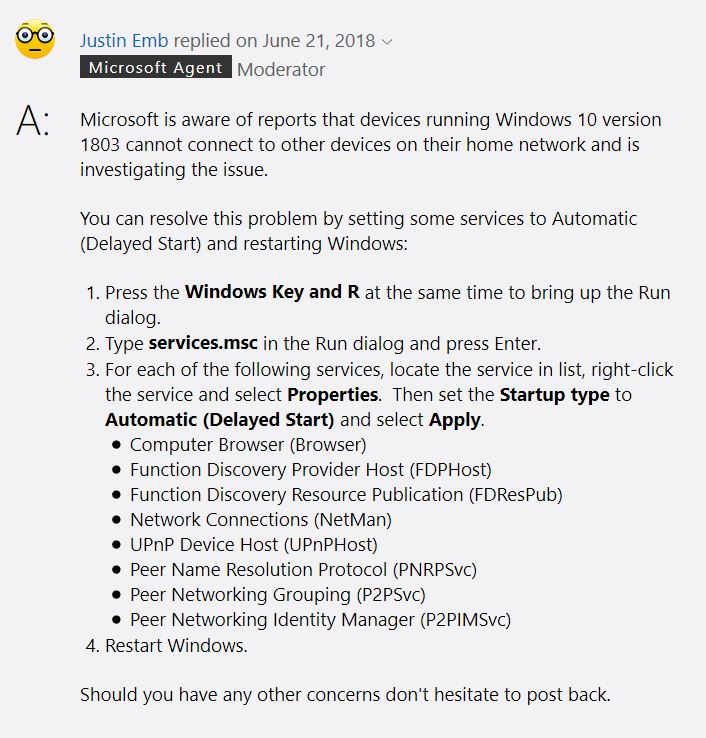 Resetting startup type for a plethora of networking related services in 1803 offers some hope of relief, according to MS Answers.

While the MS Answers response labels this as a “home networking” issue, it actually applies to all Win10 networks where a formal network infrastrucutre is absent. By that I mean no local or cloud-based domain controllers, no local DNS, no Windows Server based file and print services. That describes a lot of small business networks as well as home networks, so it’s a bigger population than one might think.

Personally, I didn’t have any trouble connecting over the LAN from one node to another after upgrading the 1803. My issue was node visibility.  That means seeing all “live” Win10 nodes on the network at any given moment. For me, the only service changes necessary were those for the Function Discovery items in the MS Answers Q&A item.

Those who do experience network issues with 1803 might want to try resetting startup type for both Function Discovery items. If that doesn’t fix things, make sure the local network is set to “Private” status. Ditto for network discovery and file and printer sharing in the Network and Sharing Center. Some users also report that turning on Public folder sharing under All Networks makes networks visible. If all else fails, try the whole gamut listed above.

One more thing: I was able to confirm by experiment that a restart is necessary for machines whose settings are changed make them visible to the network. If you make some or all of the aforementioned changes but nodes still remain invisible on the LAN in File Explorer, try a restart. That may do the trick!