More on Chipset Drivers and the Intel Driver Update Utility


Last Friday (January 27, 2012) I posted a blog entitled “Intel Driver Update Utility and Intel Chipsets,” wherein I observed that this useful online tool — which analyzes the systems on which it’s running, and reports on the currency and status of the drivers for Intel components they contain — doesn’t always recommend the most current Intel chipset driver. This observation nagged at me sufficiently that I did some additional research to determine why this might be the case, and how to find and use the most current such drivers for those who choose to use them.

About the “latest version” of the Intel Chipset Software

Intel proffers a Web page entitled “Do I need to upgrade to the latest version” under the general head of Intel Chipset Software Installation Utility. This page suggests an “If it ain’t broke, don’t fix it” approach to updating the Intel chipset software and its associated collection of drivers. Here’s what that information says, verbatim:

Finding the “latest version” of the Intel Chipset Software

In the Intel Download Center, specify the selections “Chipsets” (Product Family), “Chipset Software” (Product Line), and “Intel Chipset Software Installation Utility” (Product Name) on the initial Find Downloads by product name window that appears. This produces a Find downloads by categorywindow where you can specify your operating system (Windows 7 (32-bit) in my case) and Download Type (I picked “Utilities, Tools, and Examples” because that’s what provides the INF update utility that automatically updates Windows drivers for those willing to bypass the preceding instruction to “follow the have-disk installation instructions” (the chipset driver itself isn’t accessible through Device Manager in any case).

This is where things start getting interesting. Intel’s label for “Latest” driver applies to the file they’ve updated most recently NOT to the file with the highest version number (which actually indicates the most current driver). Here’s a screen shot that illustrates this potential point of confusion very nicely: 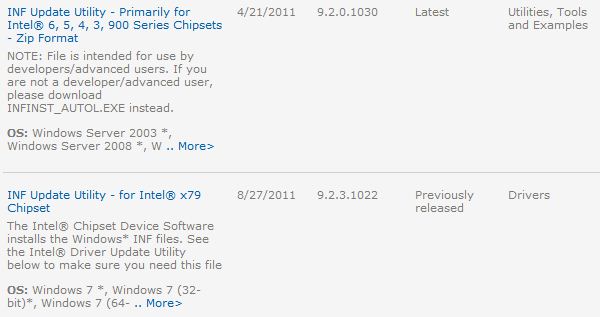 Notice that the utility with the higher-numbered version (9.2.3.1022 versus 9.2.0.1030) also has the more current date (8/27/2011 versus 4/21/2011). It’s essential to pay close attention to all of this information if you want to override the recommendations of the Intel Driver Update Utility, and choose the right version to download and install on your PC.

[Note in response to reader comment: You MUST identify the chipset in your PC and search on that particular chipset model to find the drivers and installation software that match it. I don’t mean to suggest that the version numbers mentioned in this or the previous posting are prescriptive for all PCs and all readers. Rather, they were meant only as illustrations of the various version numbers that I encountered for the various chipsets on different PCs. Thus, for example the X38 chipset on my production PC gets version 9.2.3.1022 mentioned elsewhere in this post. OTOH, my D620 Latitude notebook has a Mobile Intel 945 Express chipset and gets version 9.3.0.1019 instead. As they say on the Internet, YMMV, so be sure to grab only what’s relevant for your particular chipsets.]