In reading about a new version of and model for web browsing in Windows 10, I often find myself nodding along and thinking “‘Bout time!” Over the past two years, I’ve been making a steady move away from IE to Chrome and Firefox, not necessarily because I want to, but because so many of the websites I visit either don’t work very well (or at all) in IE, and seem to work fine (or at least much better) in one or the other two of those browsers. 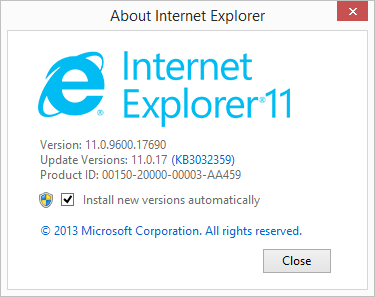 Can the once and future replacement for IE improve upon its recent foibles and failures? Here’s hoping…

Let me recite a few vexing cases in point:

1. Facebook: I’m nowhere near as active on Facebook as others I know, but I do drop in a couple of times a day to see what my friends are up to, and to post updates about blog posts, articles, and so forth. In IE, Facebook crashes or hangs pretty often (more than once a day) so I’ll often fire it up in IE, get stuck or hung up, and simply switch to Chrome instead.

2. LinkedIn: I use LinkedIn for a lot of different professional activities, and also post updates there, too, as on Facebook but also with curated pointers to quotes and articles. Lately, much of the active content on LinkedIn either doesn’t work, or takes forever to run, whereas it works quickly and easily on Chrome and/or Firefox. Same goes for Google+.

3. Hang one tab, hang the root executable: I used to think that browser tabs were pretty isolated from each other so that you could keep going with some even when one or more others encountered issues or slowdowns. Lately, I’ve found myself having to use Task Manager to identify which IE (tab) session is hanging or stuck, and hoping that a right-click to “End Task” will actually do the trick and bail out of the offending or failing browser tab. Sometimes it works, but more often it doesn’t and I have to kill everything to get IE working properly again.

Here’s hoping that “Spartan” (or whatever the new Windows browser takes as its official cognomen) will fix all of these problems and more. Because I do still have to use IE for some things — particularly when it comes to MS downloads and such from MSDN and other Microsoft pages — there’s currently no escape from the occasional glitches it seems to throw my way. Do my hopes for a better browser from MS make me an incurable optimist? Maybe so, but as long as I’m tied to Windows, I’m inclined to wish, hope and pray that new efforts and initiatives can produce better and more reliable results. We’ll see…