Starting on July 22, Windows Update on Win10 Build 10241 started offering me a Synaptics driver update for the touchpad on my Dell Venue 11 Pro 7139. And man, did my system get caught in a crack, because not only did that update fail to install, but my touchpad quit working completely on that machine. In fact, device enumeration no longer detects that the touchpad is present, though an HID composite device with Synaptics hardware IDs shows up in Device manager. Even after running down some Windows 10 software to try to reinstall the driver — courtesy of Lenovo, which is apparently on something of a tear, with lots of Windows 10 drivers becoming available for its notebooks and tablets over the past couple of weeks — I get no joy from this situation at all. Even uninstalling the drivers doesn’t seem to help (though I haven’t tried the option that clears the files out of the DriverStore directory, so maybe I should try that next). No dice there, either. Sigh. 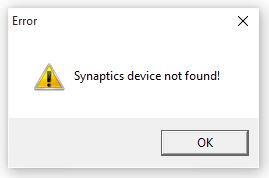 This is the last thing you ever want to see when trying to re-install a munged driver.

It looks like I’ll have to perform a clean install of the final Win10 version whenever that comes along (something that probably makes sense anyway, given how many different builds I’ve installed on that machine over the past 8 months or so) to get my complete set of drivers back. I have to question the logic and/or controls offered to users or admins by Windows 10 update, in that it forces driver installation with no way to refuse. Given that notebooks and tablets can be very touchy about what drivers they will and won’t work with, it seems to me that these items in particular should be optional, so that those responsible for such systems can decline wholesale driver updates until they’re known to be good and working. I’ve spent an inordinate amount of time jacking around with the touchpad on the Dell VP11 keyboard, as numerous earlier posts to this very blog will somewhat cheerlessly attest.

And another thing: even for Windows 8.1, MS provided links to TechNet for standalone installers for update items. Maybe something was wonky with the WU installer when it tried to update the Synaptics drivers. Maybe a standalone installer could have gotten me over that hump. It would be nice to have that choice, but if it’s available to me, I am clueless as to how to find it. Sigh again.

I really like Windows 10, and I think it’s a good, solid OS. But some of its ancillary features, particularly those relating to update selection and update management make me a little bonkers. Are you listening Microsoft? I sure hope so…