Drivers are slowly catching up with Windows 8

In my previous post “Interesting Windows 8 Issues on Lenovo X220 Tablet” I delved into some Windows 8 driver shenanigans as they related to that machine. In the past few weeks I’ve performed over two dozen Windows 8 installs on several notebook and desktop PCs, and have started getting comfortable with post-install driver catch-up as well as the surprisingly fast and reliable OS installer itself. At the same time, I’ve observed an increasing influx of Windows 8 drivers as device makers start gearing up for the OEM Release Candidate in July 2012, and the General Availability release in October 2012 as well. Here’s my most important point of this post, new and exciting driver and software updates notwithstanding: In the vast majority of cases, Windows 7 drivers and software work FINE with Windows 8! But around the edges of the computing industry lots of interesting new developments are also underway…

Thus, for example, you can now find a Windows 8 Beta Drivers page amidst the Lenovo support pages, and you are starting to see Windows 8 discussions (but still with lots of disclaimers) on the related forums at the HP (forum post search) and Dell (community search) sites. Other vendors are no doubt working feverishly on Windows 8 to prepare for the upcoming OEM/RC release but most are being much more cagey and less visible about their Windows 8 efforts at the moment, however.

One interesting ray of sunshine comes from nVidia, which is now including Windows 8 in its lists of recognized operating systems. Alas, the site couldn’t recognize my video card to tell me I’m running the current Windows 8 friendly release (296.17, released March 6, 2012) though it was happy to let me navigate to that driver manually: 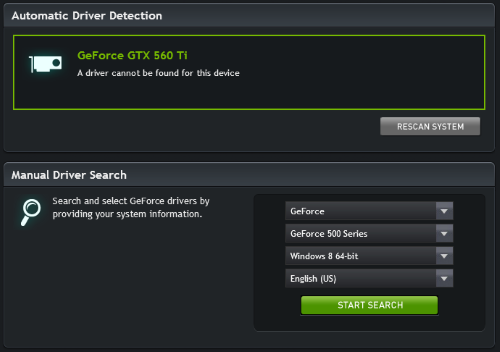 I’m expecting to see an increasing number of Windows 8 specific drivers popping up all over the place in the weeks and months ahead, as release dates draw closer. As if to confirm my expectations, Gabe Topala has just released a beta version of his excellent System Information for Windows program (SIW) that’s named SIW-X64 v2012.04.08. It now recognizes the Windows 8 OS and its runtime environment:

Just the beginning of a huge wave to come. Stay tuned: I’ll report other updates and goodies as I find them!