Following release of Windows 10 1703 via the Media Creation Tool, I’ve been busy this weekend upgrading 6 of my 8 PCs. I’m delighted to report that Creators Update delivers easy upgrade experiences to early adopters. I hit zero snags upgrading those systems. Post-upgrade clean-up was more or less flawless, too. That said, I encountered one driver issue. Upgrading the Intel Management Engine (MEI) on my Dell Venue Pro 11 hybrid tablet caused a BSOD. Extracting those drivers from the Dell installer plus manual update in Device Manager put things right in under a minute. 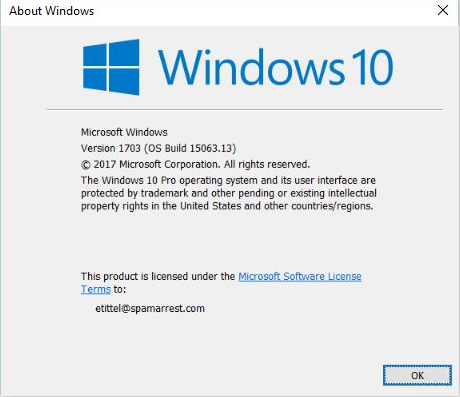 When all is said and done, Creators Update shows up as Build 15063.13, with cumulative updates already applied.

After Creators Update Delivers Easy Upgrade, What Then?

For me the usual post-upgrade drill goes like this:

Run Disk Cleanup (cleanmgr.exe) using “Run as administrator.” It deletes Windows.old and other remnants of the previous Windows version.
Check drivers for updates or additions (my old standby for this is the for-a-fee DriverUpdate, but the free Windows Update Minitool, aka WUMT, does the job as well or better).
Run DriverStore Explorer (rapr.exe) and remove obsolete and unneeded duplicate device drivers.
Fire off PatchCleaner and clean up orphaned packages from the Windows Installer directory.
Run Uncleaner and root out duplicate and temporary files; CCleaner ditto (always grab the “Slim” version).
Make an initial image backup of the pristine upgrade environment (I use Macrium Reflect Free with great results).

I *always* make an image backup before starting the upgrade process. Thus, I am cavalier about deleting Windows.old. If you aren’t quite sure you’ll stick with Creators Update, remember you now have only 10 days before the old install gets deleted automatically.

In working through that process on the six installs I’ve upgraded so far, I observed just the one driver problem reported. I did find some duplicate or obsolete graphics drivers (both Intel and Nvidia), along with some duplicate system device and USB entries. PatchCleaner found very few orphaned packages (one or two). No action required there. Uncleaner and CCleaner both found hundreds of MB worth of detritus that was quickly removed. And with a clean image of the newly upgraded OS in hand, I’ve got a solid starting point for future recovery, if needed.

Bottom line: Version 1703 (OS Build 15063.13) appears ready for prime-time. My next upgrade, in fact, will be on my production PC. That says I think it’s ready for workaday use!