The alarm settings in VMware vCenter Server 4.0 have been vastly improved in comparison to what’s available in VMware Infrastructure 3 (VI3). The new alarms let you configure many custom alarm triggers and corresponding actions. VI3 alarms are very limited; you can only configure host and virtual machine alarm types and there are very few triggers that you can select from, as shown in the chart below.

In vCenter Server 4.0, alarm types are split into two categories, conditions/state and events, and each category has different triggers.

I started to create a table with all of the new alarm triggers in vCenter Server 4.0, but there are so many that I abandoned the project. Below is a sample of some of the new VM condition triggers. 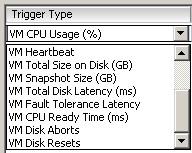 Instead of listing them all out, here’s a summary of what’s new with alarms in version 4.0:

The new Condition Length eliminates many false alarms, so it’s a very welcome addition. In VI3, for example, if you set an alarm for VM high CPU usage of 90% it would trigger any time the VM exceeded that percentage. I don’t really care to know about a VM that has high CPU usage over 90% for a few seconds, but I do want to know if that high CPU usage continues for more than 5 minutes. The new Condition Length field let’s you define the length of time that the condition is happening before the alarm goes off.

There are also many more alarms created by default (35) in vCenter Server 4.0 then in VI3 (only 5) as seen below. 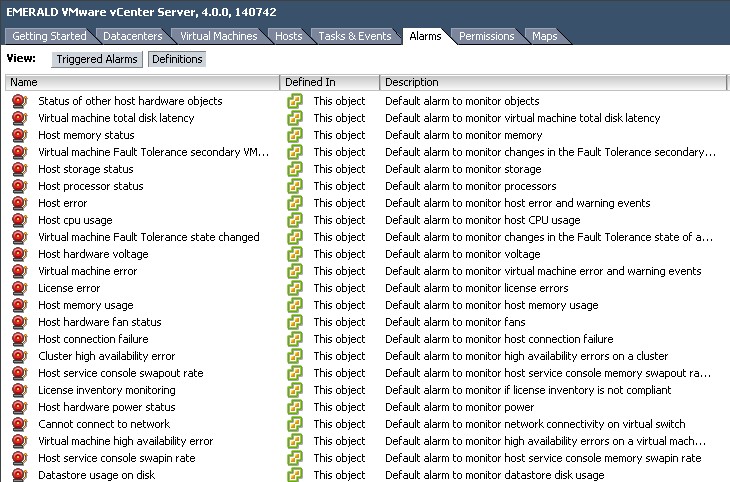 So be sure and check out the new alarms in vSphere and get them properly configured and set. The default alarms already have triggers configured, but you’ll want to set up whatever actions you want for each.