It was a rivalry of ShoreTel’s premise-based and cloud- based offerings last Wednesday at the TD Garden in Boston…sort of. 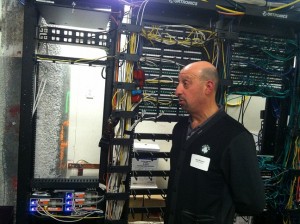 Jay Wessel, VP of technology for the Celtics showing off new ShoreTel equipment in the data center, which takes up less room than the legacy phone system.

The Boston Celtics, a customer of ShoreTel’s premise-based phone system went up against the Brooklyn Nets, a new user of ShoreTel Sky, a cloud-based business VoIP offering made possible through the Sunnyvale, Calif.-based vendor’s recent acquisition of M5 Networks.

My night kicked off with a tour of the Celtic’s data center — housed across the street from the Garden — by Jay Wessel, vice president of technology for the Boston-based basketball team. Formerly an Avaya customer and a self-proclaimed “hardware guy,” Wessel had been interested in ShoreTel’s software-based phones for several years before making the switch this season in a newly renovated office.

While the employees (and just maybe the players, too) are enjoying caller ID and forwarding capabilities that the new, slick-looking phones provide for the two Boston-based and Waltham offices, the Brooklyn Nets were looking into making an even bigger leap of faith.

Once inside the Garden before the start of the game, Mireille Viau Verna, senior director of IT for the Brooklyn Nets, described the recent relocation of the Net’s office from their New Jersey location into Brooklyn. Rather than rip out and bring their legacy equipment with them, the New York-based team decided to go big and adopt a cloud -based phone system.

Verna and her team reached out to M5 — now ShoreTel’s Sky division — and was up and running in the cloud within hours, she said.

The cloud-based system — a newly-appointed leader in the UCaaS Magic Quadrant this year by Gartner, and also the first year Gartner has announced leaders in this category — is a great fit for the small Nets administration team, Verna said, noting that the new system came in handy when Superstorm Sandy struck the East Coast earlier in the Fall.

“If we had it to do all over, we’d go with the cloud-based system again,” she added.

The two ShoreTel customers may have different phone system preferences — and probably other differences as well, judging by the scuffle that broke out between several Celtics and Nets players after a technical foul. However, both teams can agree they are enjoying new digs, complete with new IP phone systems helping them accomplish greater business goals and handle larger call volumes, with less risk of downtime.