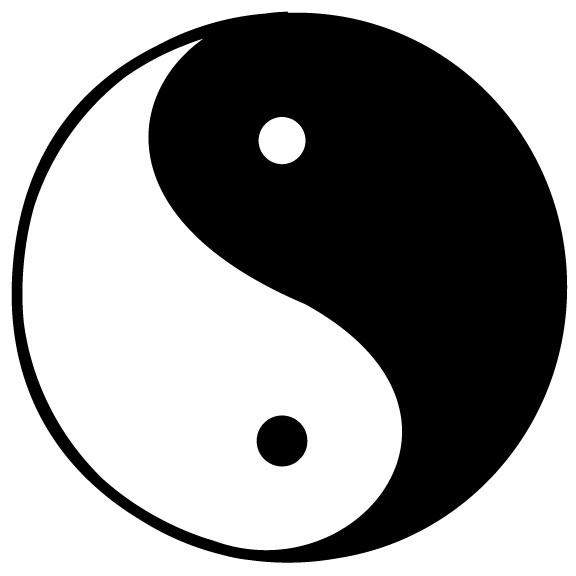 This morning I ran across a blog post by Ben Horowitz about managers who don’t have one-on-one meetings.  In that post Ben drew a distinction between a ‘good organization’ and a ‘bad organization.’  According to Horowitz, people in bad organizations struggle to get anything done; the expectations are unclear, and the company culture fights any sort of forward progress.

Now believe it or not, I’m not going to say that, if you find yourself in a bad organization, you should immediately polish up your resume and move. There are just too many bad organizations for that; you’d be jumping ship every two months.

Instead, I’m going to assume that you are trying to stay, and hear some niggling, tingling voice in your ear that life is too short for this.

There are some things are are a bridge too far, that indicate, to me, it’s time to leave or transfer.  Here are my top three.

END_OF_DOCUMENT_TOKEN_TO_BE_REPLACED

How to Create Your own E*Book

I spent last Friday and Saturday at BarCampGR, an un-conference hosted at Calvin College; one of the sessions was on how to make your own e*book.

For those unfamiliar with BarCamp, it is a conference with no pre-planned agenda. You start out with a blank sheet of paper, a few hours before the event starts.  The organizers divide the paper into time and location slots, and invite potential speakers to propose something.  (If you are really ambitious, you can propose your idea on the reddit a few days before, to see if anyone expresses interest.)

Ideally, by the time the conference starts, you’ve got a full plate of events, something like this: 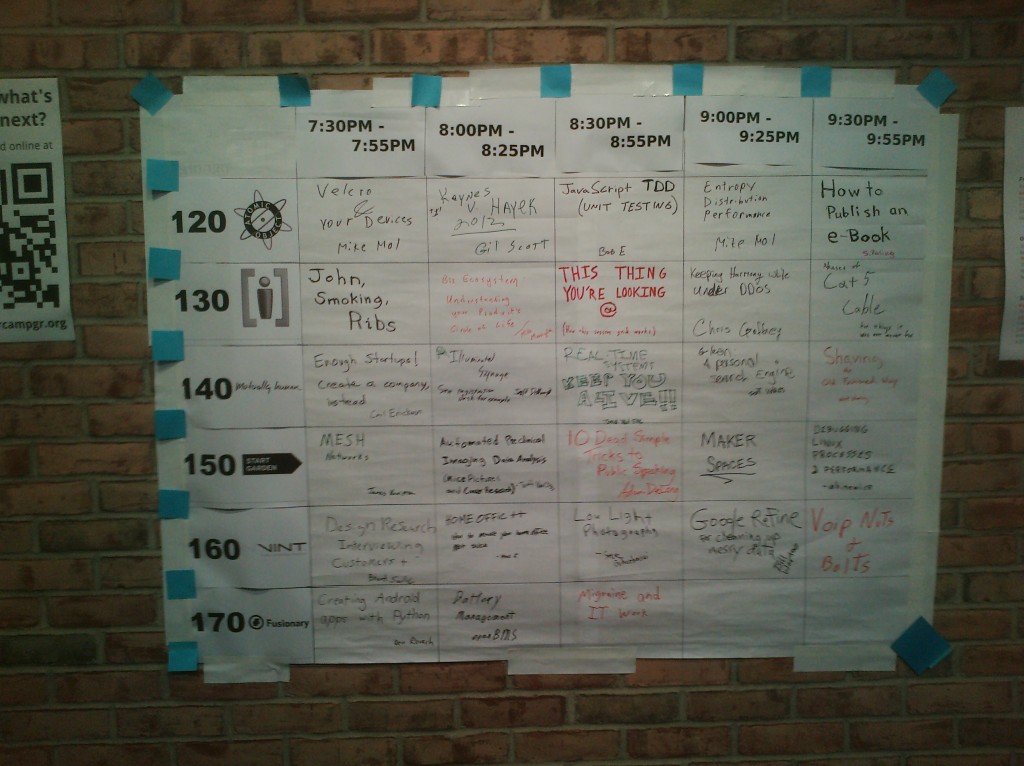 This is the actual schedule from BarCampGR 2012, and, yes the talk in the upper-right was on how to publish an E*Book, by my friend, Steve Poling.  More than any E*Book, Steve promised to help you put your document in the right format to sell on Amazon – with no special royalty fees.  Steve had just finished posting his second e-book on Amazon and promised to reveal all — I wanted to see what all the fuss was about.

END_OF_DOCUMENT_TOKEN_TO_BE_REPLACED 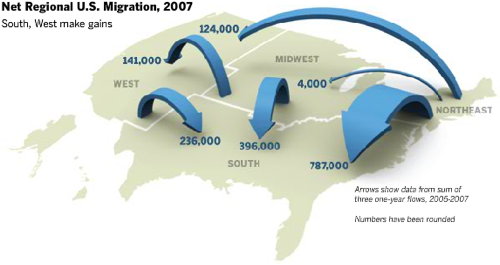 It’s been four and a half months since the last post about my story as a digital migrant.  (If this is new to you, you might consider reading the original essay, then parts one and two of my story, before checking out that last post.)

A lot can happen in four months.

Before I get to my update, though, I’d like to talk about a common aspect of digital migrant work — the systems upgrade.

END_OF_DOCUMENT_TOKEN_TO_BE_REPLACED

From Outsourced, to Offshore … and Back Again. 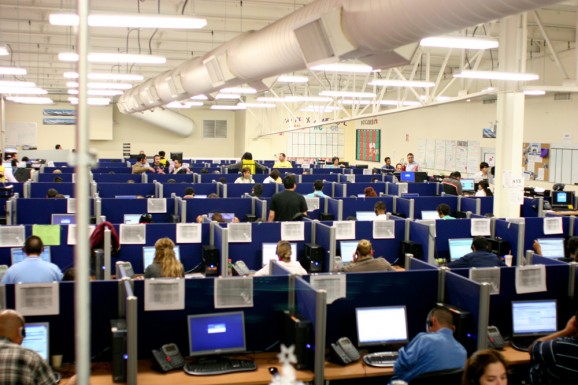 In my Informations Systems Policy Class in Graduate School (yes, they have classes for that), outsourcing was one of the hot topics of the day.  Specifically, outsourcing of business process. The basic idea was to clearly identify services, then cut cost by moving them to low-wage areas.  We even had impressive, triangle-shaped strategy graphs that talked about what to outsource and how to outsource it.   I ended up doing my master’s capstone work on the subject of outsourcing; it still stands up to scrutiny today.

But I have to admit, when the Washington Post ran an article on Indian Companies setting up call centers in the United States, I was as surprised as the next guy.

There is a lot of confusion going on here; a lot of doubt and mis-understanding.

I’m going to try to clear it up … and let the opportunity show through.

END_OF_DOCUMENT_TOKEN_TO_BE_REPLACED 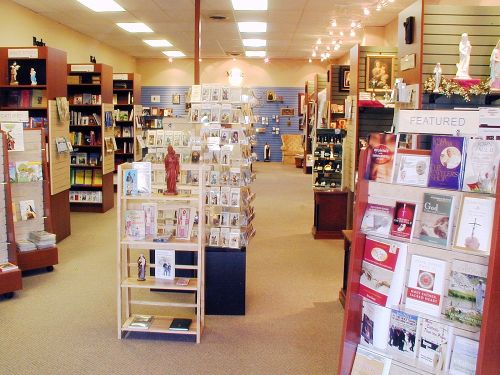 The Aquinas and More Store Today

I’ve been interviewing Ian Rutherford, the president of the Aquinas and More Bookstore in Colorado Springs, for the past couple of weeks. (See Part One and Part Two).

Ian is a fascinating case-study.  A self-taught technologist, he moved up the ranks to do tech support at Pizza Hut’s corporate headquarters, then taught himself enough web-slinging to create an e-commerce website at the height of the dotCom boom.  My last post ended with Ian leaving one employer, the largest Catholic Bookstore in Denver, after created their e-commerce site, and starting his own website/business in Colorado Springs — the physical store would come later.

It’s time for the rest of the story – the challenges, risks, advice, and the long road to profitability.

END_OF_DOCUMENT_TOKEN_TO_BE_REPLACED

Last time we talked about Ian’s back story, and left him with a tech support position at Pizza Hut Corporate Headquarters in Texas, learning the skills he would later use to start his own business.

Iwanted to ask Ian how he decided to move to colorado, start his own business and how it went.

It’s time for part II of our story.

END_OF_DOCUMENT_TOKEN_TO_BE_REPLACED

A Road Less Travelled – I 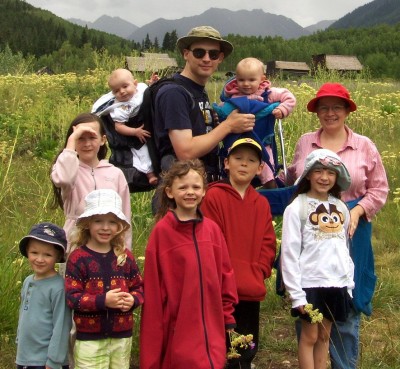 “I learned this, at least, by my experiment: that if one advances confidently in the direction of his dreams, and endeavors to live the life which he has imagined, he will meet with a success unexpected in common hours.” – Henry David Thoreau, Walden

In this column I like to talk about people do what Thoreau is talking about: Advance in the direction of their dreams.

I endeavor to make that discussion realistic, to talk about not just the dream, but what they had to give up to get there, how it turned out, and the stumbles along the way.

Please allow me to introduce you to Ian Rutherford.

Ian has no technical degree; he actually has a political philosophy degree from the University of Dallas.  Self-taught from the start, he landed a tech support position out of school, and taught himself network support, and quickly earned a set of certifications, including A+, MCSE, and a Novel Certified Engineer.  (Those of us with a little grey hair remember a company called Novell that wrote the first operating system that allowed personal computers to talk over a local area network.  Those of you without, i’m sorry, and please keep off my lawn!)

But that is not why I asked if Ian would interview for the blog.

In 2002, Ian quit his day job, moved to Colorado Springs, and, with the help of his family, opened Aquinas and More Catholic Goods, a small independent bookseller.

END_OF_DOCUMENT_TOKEN_TO_BE_REPLACED

The Rest Of The Amazon Story Writers tend to be painfully aware of confirmation bias — at least, the good ones are.

This bias happens any time we look for evidence to support our beliefs and ignore or reject any facts that might lead to a different conclusion.

Just yesterday I published a brief piece on Amazon.com’s new employee tuition assistance program that told only the good stuff, the story the company wants to tell.

In a way, it’s kind of like a bad photoshop job.

It looks great, until you put it up under some scrutiny.  After that, you don’t know what to believe.  (Consider the photoshop job at left, from izisSmile.com.  Oh, come on.  Spoiler at the end.)

The official story, the one I told yesterday, is that Amazon.com has a new tuition assistance program for warehouse employees, to study not what Amazon needs, but instead whatever field of study the employee is interested in that the U.S. Bureau of Labor Statistics agree is a high-growth, high-demand occupation.  So go be a nurse, or mechanic, an electrician, an accountant – on Amazon’s dime.

In my excitement for the program, I compared it to the G.I. Bill.

Let’s talk about the rest of the story.

END_OF_DOCUMENT_TOKEN_TO_BE_REPLACED

Another Hit From Amazon

Ten years ago I was working in an office (much like the one at left) for a Fortune 200 Corporation.  The company had was organized as a collection of independent business units, each under a group, each under a division.

In most respects, we really did act like independent units … except for HR.  401(k), Payroll, annual reviews, and most other benefits were run through one central office.

At the time, I was working on my master’s degree at night.  As you might expect, I had to take a course of study appropriate to my job, and each individual course had to align with my job.  There was a cap for the amount I could be reimbursed per year.

Every May and December, around the 15th, I would slink over to the office manager’s desk, photocopies in hand, along with the filled out Excel Spreadsheet and the inter-office memo.  And, every time (literally, every single time) she would make a passing comment like “don’t expect this very quickly; I think the lady that handles these things at Corporate is going on vacation for two weeks.

Wait a minute … the person that handles all tutition reimbursement, for every division of a 20,000 employee company, always take vacation exactly when the traditional semester ends?

Quite frankly, the whole thing felt like one of those $1 rebate coupons that you get with your batteries, the kind that sounds like on the package, but nobody actually, like, you know, sends in.

Amazon is doing it better.

END_OF_DOCUMENT_TOKEN_TO_BE_REPLACED

Mayer takes the helm at Yahoo! — now what?

Unless you’ve been hiding under a rock, you probably know that last week Marissa Mayer accepted a position as CEO of Yahoo!  The troubled once-darling of Silicon Valley.

All is not lost; according to web rankings site Alexa.com, Yahoo is still the 4th heaviest trafficked website in the United States, hanging right along with giants YouTube (#3) and Amazon.com (#5) in the United States.  The worldwide numbers are similar, with YouTube 3, Yahoo! at 4, and Badiu.com, a Chinese Search Engine, at the number five slot.

The question of the day seems to be: Can Mayer turn the company around?

I have a different question: How did a thirty-seven year old get the job?

Allow me to elaborate.