For me the idea of serving as an employee has always felt a bit surreal.

I did not want a day job.

From my first technology job I wanted to build something for myself, to strike out on my own.

I still do not want a boss, or to have to be in a cubicle at a certain time every day, or deal with performance reviews. None of it. Frankly the idea of going back to that at this point is terrifying. I’ve essentially spent the last two years getting to work the way I want because my clients trust me.

On January first of 2017, I went back to being an employee again, but without the downsides I’ve listed above.

I would like to tell you why, and how I got here.

But first, how I started freelancing.

END_OF_DOCUMENT_TOKEN_TO_BE_REPLACED

I have been privy to a few conversations around the topic of career progression lately. Maybe it is the time of year. It is almost time for performance reviews. People with full time jobs are probably wondering if they are getting a raise and how much that will be. And also if they will get bequeathed with a shiny new title. Something that will really let the others know who’s who around there.

Last week I touched on what I think it means to be a Senior technologist. This week I want to talk about what a career ladder is for people that work in technology.

END_OF_DOCUMENT_TOKEN_TO_BE_REPLACED

Test IO is a Crowdsourced testing company.  Based in Berlin, Germany – the company also has offices in San Francisco. It was as VP of engineering for Lithium Technologies, working to make CRM Software Social, that Phil Soffer saw the opportunity for Crowdsourcing. One of his visceral memories at Lithium was working on a challenging project, getting it to be successful, then losing the idea of that success when a handful of unhappy people called the senior executive team to complain about a bug.

If only those teams had quick access to testers, on-demand, a faucet they could turn on and off just prior to release — they could have found those problems.

When Phil was asked to head a Crowdsource testing startup-up, his answer was yes.

END_OF_DOCUMENT_TOKEN_TO_BE_REPLACED

What Does it Mean to be Senior Technologist

Figuring out rank in the Boy Scouts is easy. You get this number of merit badges, complete these projects, do a review board and presto. The work isn’t easy of course, but at least the boundaries are clear for people that want to progress. Ranking in the workforce is a complete mystery. It is more social than earning a badge. The number of blog posts trying to describe how to advance in a company hierarchy is testament to that. Regularly talking with people and doing the occasional interview has driven this point home for me.

I had a senior person on the phone more than once that couldn’t describe the work they were doing, and they couldn’t tell me about where they fit in the project. Despite years of experience, by the end of the call I definitely thought they were closer to intern than architect.

I have a few soft expectations of people when they claim to be senior.

END_OF_DOCUMENT_TOKEN_TO_BE_REPLACED

A few years ago I visited a company in West Michigan that had graphs on all the walls. Graphs everywhere; very impressive.

Then I looked at one.

It was a percentage on on-time project delivery chart for the past year – and it looked something like this: 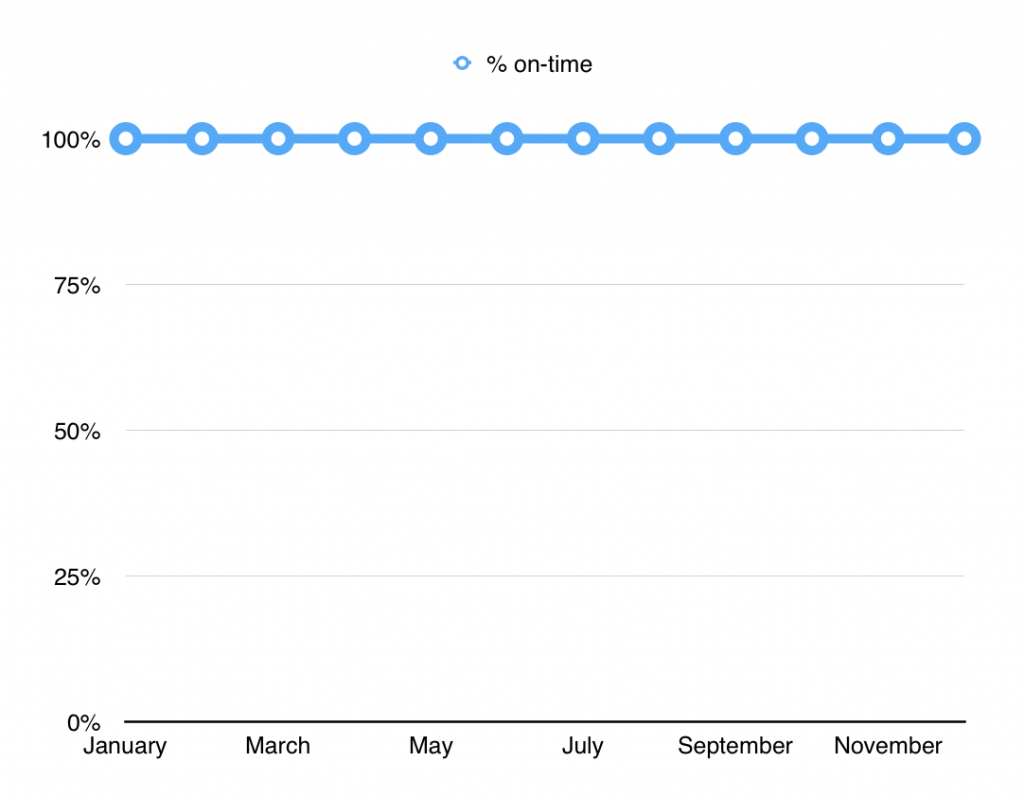 The typical response to this is probably either excitement (they are doing the best humanly possible!) or disbelief, or perhaps, a small chance the company actually managed to hit dates by cutting scope. My response was a little different.

How long does it take for process transformation to work? To a reach critical mass at a company for the amount of people that will not just abide by the new rules, but believe in them.

For Holocracy, that number seems to be about five years. If it can catch on at all. Five years later, Zappos seems to be struggling to keep the vision of Holocracy alive. Employees feel like the management system is designed to empower process (and maybe process consultants) instead of people. Under Holocracy, meetings have a particular flow and style that can not be interrupted. And, new roles have to created and documented for each task that might need to be completed. It seems that rather than helping people develop software in a sustainable way, Holocracy has become the Borg from Star Trek.

Holocracy might be irredeemably bad (if it were good there would be other large, public case studies aside from Zappos, right?), but I’m not sure that is why it is taking so long to catch on. Process change is like changing the direction of a large boat. It takes a long time and a lot of people.

END_OF_DOCUMENT_TOKEN_TO_BE_REPLACED

How to Estimate Anything

Several years ago, (so many I can’t find the original blog post, even here), I claimed that because of the amount of unknowns, creating a real estimate was impossible. My friend Ben Simo left a comment, saying “Two Weeks.”

I guess I didn’t say it had to be accurate.

Tom Demarco once claimed the way most estimation is done is to guess a number just hard enough that the technical team is scared, but not aggressive enough that they laugh at you. If they breathe a sigh of relief, DeMarco suggested that [bad] management can find some emergency reason to make the dates more aggressive.

Here’s the kicker: Most organizations can see a massive increase in prediction accuracy using a technique I call the Heusser Estimation method – a method I’m willing to give away, on my blog, for free, right now. END_OF_DOCUMENT_TOKEN_TO_BE_REPLACED

Having a newborn makes you (or rather, me) re-prioritize things. My house has the original smoke detectors from when it was built in 2009. There is nothing wrong with them if you ignore the fact that they go off if you over cook dinner. Or the occasional 3 am chirps to let you know that one of the 4 smoke detectors in the house needs a new battery. This seemed like an ideal time to upgrade the smoke detector near the nursery to something that has a carbon monoxide detector built in. And also something a little more modern that I could monitor from my phone.

A couple of years ago I bought and installed a Nest Thermostat. I have been very happy with that and decided to go with a Nest Protect based on reviews and my personal experience with the brand.

Here is what I think about the Nest Protect so far.

END_OF_DOCUMENT_TOKEN_TO_BE_REPLACED

This blog, Unchartered Waters, is designed to help people. Sometimes, the help is advice on how to estimate projects. Other times, it’s how to negotiate. Today, I’d like to write about what to gift ideas for your tech friends. Specifically, little stocking stuffers – small gifts, between $5 and $25. I tend to like toys, games and books that lead to a conversation. People can react poorly to a book, because it implies an investment of time, while a game says “I want to spend time with you on something fun…”

Here are a few ideas.

END_OF_DOCUMENT_TOKEN_TO_BE_REPLACED

I did something stupid a couple of days ago, I got into an argument on twitter. Someone made a post claiming monetary incentives always harm performance. The word always being used there made my head spin, and I just couldn’t resist.

I have been reading a book called Why We Do What We Do by Edward Deci over the past couple of days. Deci is a professor of psychology at the University of Rochester and has spent a significant amount of time researching different types of motivation and how they affect performance. Like with any psychological study, the results are varied and difficult to understand. But, there are a few common themes, and I think they apply to how technical people are compensated.

Here is my take on motivation and incentive plans crossed with a little academia.