Hyperconverged Infrastructure – What We See in Deal ScoreCard 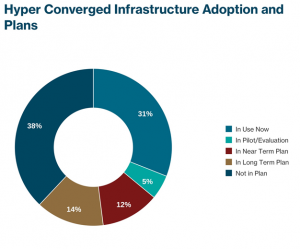 From Deal ScoreCard HCI Q4 2017. 62% of surveyed IT shops have plans to implement the form factor.

We see Dell EMC as the number one considered vendor in the space and holding relatively steady participating in anywhere between 40 and 54% of the deals that we saw over the last year.  Recent announcements by Dell EMC for NVMe support in VxRail appliances leveraging VSAN software bodes well for buyers looking to leverage the latest and greatest in an integrated solution.  This sets up a contrast to the software based direction Nutanix has announced.

In the study, Dell EMC captured the majority of transactions that we collected data on and tops our leaderboard.  We are seeing increasing steady gains from Nutanix and increasing gains in pre-purchase consideration from HPE.  We aren’t seeing nearly as favorable results from Cisco Systems, from SuperMicro, nor Lenovo, who are either holding flat or declining in closed business transactions amongst those surveyed.  We have previews available of these charts and data.  If you’d like to get a look at them, schedule a walkthrough.

41% of the hyper converged infrastructure purchases included somewhere between 10 and 100 TB of storage.  Understanding the scope of the deals is useful for product management modeling and is a standard part of every Deal ScoreCard report – along with detailed win / loss transaction data.

We see a significant percentage of transactions that involve the manufacturer and the value added reseller. 65% of deals that we saw had manufacturer involvement. This is high for an infrastructure category. If you’re a channel manager at an HCI vendor, you have fuel for your argument that you need more MDF and training dollars for your resellers. 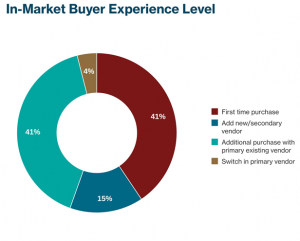 Of all of the hardware markets we cover (Converged, Blades, Rack/Tower, All-Flash Arrays, Backup Hardware) Hyperconverged Infrastructure is the one with the least amount of buyer experience. Notably, 41% of the buyers in the space we interviewed have just made  their very first purchase.  That same percentage of buyers, 41%, are making secondary buys from their primary, existing hyperconverged infrastructure provider. We track this important metric to see which customers are most satisfied and which vendors have the widest band of solutions to address business is evolving compute storage and networking meetings.

Workloads
Despite VDI being played down as a workload, when we look at the topics that HCI buyers are most interested in as evidenced by what they read we of course find servers at the top of the list but the number to topic that this group is interested in is virtual desktop infrastructure. Interestingly, hyper converged infrastructure which is certainly popular stands in the pack along with enterprise mobility management virtualization software and converged infrastructure. One can reasonably conclude that these are data center people who care about data center things.

Here is the list in order that we saw in terms of number of transactions we witnessed over the last six months leading up until January 2018.
Dell EMC
Nutanix
HPE
VMware
Cisco systems
SuperMicro Computer
Lenovo
NetApp
Pivot3

From the latest Deal ScoreCard, one vendor, Nutanix, has over 90% of its existing customers returning for second purchases. This is the highest that we see in our study. It will be interesting to track this metric as Nutanix shifts their strategy from being a hardware provider to being a software play.   From the survey, pre-buyers give Nutanix the edge for server performance and storage capacity that can scale independently – it’s top of mind and important to organizations that evaluate Nutanix based solutions.

For marketers, product managers, sales leaders, and strategy teams at IT vendors that leverage TechTarget. TechTarget Insights delivers observations on what is changing in 20 specific technology markets, who is winning, who is losing and why?
>> READ MORE ABOUT THIS BLOG