Recently I was building a new Windows 2012 cluster that was going to hold a SQL 2012 instance. So far so good. Something that I’ve done dozens of times. However this time something strange happened. As the SQL instance was being installed I got an error message saying that the cluster couldn’t be brought online. Looking at the cluster manager I saw that the network name for the SQL instance had failed.  Now the big difference between this cluster and all the other ones that I’ve installed was that the domain was still a Windows 2003 domain and the forest level was still Windows 2003 as well. 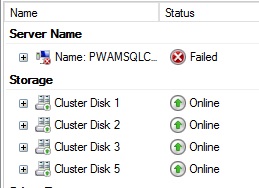 Wanting to make sure that it wasn’t a SQL Server problem I tried creating a new role on the cluster and giving it a client access point.  When that tried to come online it failed as well, so we now know that we don’t have a SQL problem but are having a Windows problem, so we can ignore the SQL Installer for now.

Looking at the cluster log, which I exported via the get-clusterlog PowerShell commandlet wasn’t much help either.  It did tell me that we were getting error 1326 when we tried to authenticate against the domain.  That being a username and password failure.

That’s a little odd given that Windows creates these passwords for me when the access point it created.  You can attempt to fix this by right clicking on the failed object in failover manager, selecting “More Actions” and selecting repair.  In this case that didn’t work either.

After bouncing around the web for a bit and talking to some people at Microsoft in the Clustering product team we found hotfix 2838043 which is titled “Can’t access a resource that is hosted on a Windows Server 2012-based failover cluster“.  This fixed the ability for the cluster name that I manually created to work correctly, however the SQL Installer still failed.