Over the last quarter century the Internet has become a fundamental utility that businesses, governments and consumers rely on; being off-line is less and less acceptable. And yet, a 2017 Quocirca research report, Winning the Domain Game (sponsored by Neustar), shows that 72% of UK business face internet down time regularly or occasionally; 61% suffer performance problems.

The problems blamed for this, range from server down-time to DDoS attacks, with around one third citing the domain name system (DNS) for at least some their internet access woes: DNS itself suffers from downtime, attacks and other inefficiencies. DNS is the Internet’s own fundamental utility which links users with online resources, translating hard to remember internet protocol addresses (e.g. 212.58.246.95) into meaningful names (e.g. bbc.co.uk). 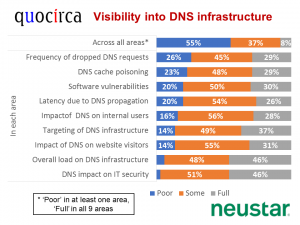 DNS problems are probably worse than these figures suggest. By its very nature, DNS is transparent to users, so the role it plays in impacting internet access may go unreported. That users do not recognise DNS issues is unsurprising, but IT managers are also likely to overlook it; 55% report poor visibility in at least one aspect of DNS Management.

This is partly due to a lack of tools (the majority lack many DNS management capabilities), but also due to the complex way in which DNS services are provisioned. More than three quarters of organisations have five or more different ways of accessing DNS, ranging from in-house servers to internet registrars and service providers. Correlations within Quocirca’s research show that they tolerate this for a reason, having multiple paths to DNS improves availability – but, it also degrades overall internet performance.

Due to the varied needs of users and profusion of online services, few organisations expect to end up with a single management point for all their DNS needs. However, those that have committed to a specialist DNS service provider reduce DNS complexity. This has a big impact, improving visibility in all areas and providing access to a wide range of value-added DNS features, ranging from the ability to route internet traffic to blocking unwanted content.

No organisation can manage long without reliable internet access, so it follows that reliable DNS services are needed too. Poor management of the latter is likely to be responsible for problems with the former more often than is currently understood.