I like this analogy. Hadn’t thought of Salesforce this way before.

Mr. Charbo is the Chief Information Officer at the Department of Homeland Security.  He’s talking about EINSTEIN, a federal government’s intrusion detection software application. It’s been available since 2004, but now the DHS is going to make it mandatory.

What took them so long, you ask? Well, apparently there wasn’t a single “business owner” with enough power to mandate EINSTEIN’s global use until February, when President Bush signed that multi-billion-dollar cybersecurity initiative.  EINSTEIN has received its share of criticism. Some detractors point out that it’s not robust enough. Some worry that if everyone’s using the same software, everyone shares the same vulnerabilities. Some people just seem content to make Bush/Einstein jokes.

I’m not sure what I think about this yet.

I wonder if the finger has to be attached to a live person for this technology to work? That makes it even MORE suitable.

Overheard: Why the mainframe didn’t die

John Belmont shows us IBM’s newest mainframe, the Z10. It has a starting price of about a million dollars.

Overheard: WildCharge is the real deal

I really want one of these. 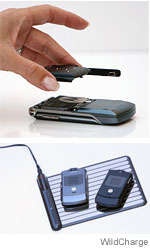 Overheard: Forget hiding your SSID — pay attention to what you name it

SSIDs are analogous to Windows workgroup names. PCs use those names to browse a network neighborhood and discover others in the same workgroup. When a PC actually tries to access a fileshare, permission is determined by computer name, user name and password. Similarly, stations use SSID to discover APs in the same ESS, but access depends upon other parameters like the station’s address, WEP keys and 802.1X credentials. Access requests must carry the right name, but the workgroup or ESS name is not a password – it identifies the resource to be accessed.