2. According to a report released at Infosec 2008, nearly three quarters of businesses are blocking the use of free __________ applications.
What is Asavin Wattanajantra talking about?

3. One unfortunate habit Bill Gates has is constantly bringing his finger tips together high across his chest while speaking. This gesture makes him seem uncomfortable and is a reminiscent of The Simpson’s __________.
What is Garr Reynolds talking about?

4. You have to hand it to the hit FOX reality series American Idol. It’s putting _________ technology to maximum use, turning it into a giant cash machine.
What is Om Malik talking about?

5. __________ languages are like sewage plants: if the average user becomes aware of them, something has gone wrong.
What is Rupert Goodwins talking about?

7. I’ve seen videoconferencing vendors trying to upgrade their offerings with high-definition media and larger screens to compete with __________ technology. You can put wings on a pig and call it a bird, but it still won’t fly.
What is Rupert Goodwins talking about?

10. Years from now, we may come to realize that the defining characteristic of Web 2.0 wasn’t gradients, bubbles and excessive use of JavaScript – it was a false belief in __________ content.
What is Ian Harris talking about?

Time Warner Cable, as well as Comcast, _____ experimenting with placing monthly limits on subscribers’ online activity.
a. is
b. are

END_OF_DOCUMENT_TOKEN_TO_BE_REPLACED

Overheard: Internet metering brings us back to 1995

In the early days of dial-up access, America Online and other providers offered tiered pricing, in part because audio and video were barely viable online. Consumers feared going over their allotted time and bristled at the idea that access to cyberspace was billed by the hour.

In 1996, when AOL started offering unlimited access plans, Internet use took off and the online world started moving to the center of people’s daily lives.

Is Brian Stelter the only person who’s writing about how we’re going backwards with Internet metering? Everyone’s acting like this is a new thing. It’s an old thing, billed in a new way — gigabytes instead of minutes.

Apparently there are still a lot of people who are trying to explain what Twitter is all about. WhatIs.com Associate Editor Alex Howard rounded up some of the A-list explanations, adding his own two cents to the conversation.

What is Twitter? Twitter is the electronic equivalent of the white board you used to have on your dorm room door. 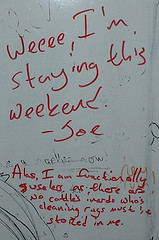 Overheard: The next killer technology could be nano

Carole Bass provides a good overview of some of the dangers nanotech poses — she’s not yelling fire, but she urges us to investigate any smoke.

Overheard: Why women go to the restroom together

Dave: I always knew womens restrooms were nicer than what we guys got. Now I see they have server rooms in there too?!?!

Just Kelly: Damn! Our secret’s out! Oh well. At least now you know why we all go in at once. LAN PARTY!!!

Alex Papadimoulis posted a good “sometimes life is stranger than fiction” story over at The Daily WTF.

It seems MacGyver got a job at Jen Frickell’s company. The best comment of all was this one from a guy named Dave. His post? “Can that server room door be locked, or does any woman in the company have access to the servers?”

Overheard: Bill Gates had “just a little trouble” with Moviemaker

I feel your pain, Bill. I wish I had seen this side of you earlier!

Which one is correct?

It’s hard to believe that Bill Gates won’t be working at Microsoft _____.
a. any more
b. anymore

END_OF_DOCUMENT_TOKEN_TO_BE_REPLACED

Video: Intel, HP and Microsoft team up for a TV commercial