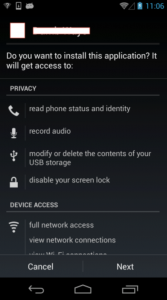 The Palo Alto Networks researchers discovered this vulnerability and according them, this vulnerability triggers only when an Android app is either downloaded from any third party app store or when users clicks on the advertisements displayed by the app.

The summary published by Palo Alto is as follows

The complete report can be read at this link.