Last post on the Google Guerrillas and I promise I’ll find a new topic to harp on for a while, but just thought you might find it interesting how Google’s viral campaign has turned against them. 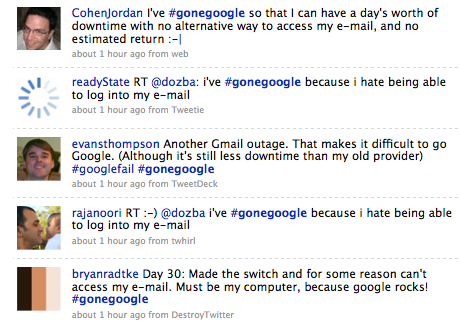 As part of its new campaign to promote Google Apps Google (NSDQ: GOOG) has been encouraging users to Tweet on the benefits of ‘going Google’ under the hashtag ‘Gone Google.’ But with Gmail officially down the hashtag has taken on a new meaning, as a number of users have used it to circulate their complaints.

PaidContent also notes that Microsoft is quietly pushing news of the revolt out there, with COO Kevin Turner pointing to news of the outage to convince current Microsoft customers to stay on board.

More on managing the user revolt: