Is your IT department fighting Google guerillas?

Google’s “Go Google” campaign is well underway, having kicked off at the beginning of the month with a series of plus-sized billboards in strategic cities, the now almost mandatory Twitter hashtag campaign and some major customer announcements, including Motorola’s mobile devices unit. The must cunning strike, however, might be a series of cheeky, innocuous-seeming posters: 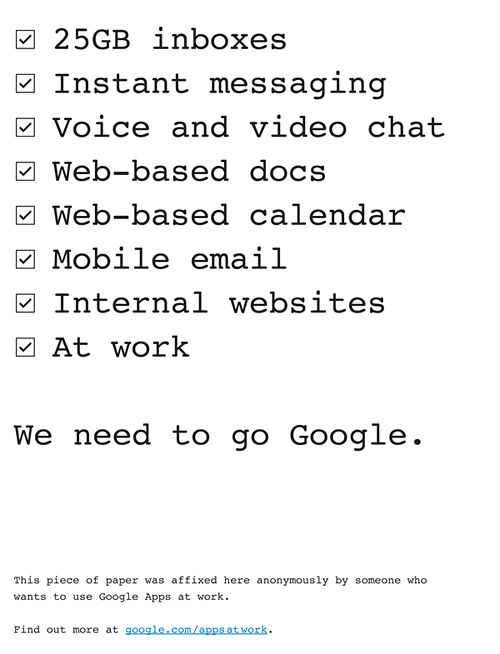 It’s not quite inciting an all-out user revolt, but anonymous postering, cryptic typewriter text and the imperative demands all break the mold in how IT projects are usually handled: It’s more V for Vendetta than white paper analysis and staged roll outs.

Have you felt the heat from users? Does it strike you as a cry for freedom from clunky, expensive apps or a call to IT anarchy?  I’m curious as to your thoughts, either in the comments below, to michael@itknowledgeexchange.com, or on Twitter at @morisy. In the meantime, perhaps V himself can give voice to those guerrilla user’s demands: