Yesterday I had the honor and privilege of attending Dell’s second annual Customer Advisory Panel (CAP) meeting, as a replacement for my long-time colleague and friend David Strom on behalf of his employer’s Website ReadWriteWeb.com (aka RWW; see “Dave Strom Note” at the end of this blog for more info). 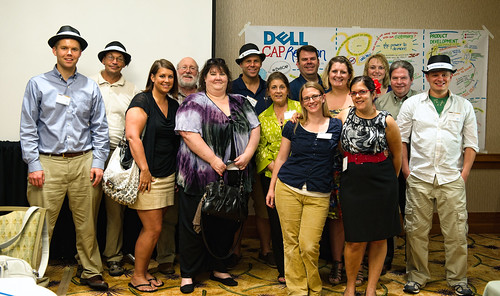 While one of the purposes of the Dell CAP meetings is to solicit input and feedback from the customer perspective, the name of the event omits another one of its primary foci — namely, it’s exclusive focus on social media, especially blogging, twitter, facebook, and so forth. Most of yesterday’s discussion focused on how Dell is using, measuring, and working with social media to provide better service and support for its customers, and to offer a faster and better channel for information dissemination as well as communication between Dell’s staff (of which there are now roughly 25,000) and its millions of customers.

I’m going to be writing an article about the details of that encounter for Dave at RWW later today, but that’s not why I’m writing this blog. I’m writing this blog because yesterday’s encounter also forcefully showed me that social media activity and savvy can be good for an IT career, or help IT professionals with a yen to get into higher levels of service, support, marketing, or communications, a great bridge from a purely technical position into something that combines technical savvy and skills with a communications and spokesperson role.

What all of this tells me is that it’s crystal clear that social media have become an important conduit for companies to  interact with customers (and partners, and even internally). That means that IT professionals with an interest in social media, and the ability to use it well, can carve out interesting and potentially more lucrative job positions and paths than might otherwise have been available to them. And it’s a win-win situation, in that effective use of social media is proving to be a great way to improve the customer experience, and burnish a company’s or organization’s perceived value or worth in the eyes of those customers.

I knew of David as the founder and first Editor-in-Chief at Network Computing magazine when I met him in 1993 when I joined the Program Committee for Interop as Novell’s representative. When I left Novell in May 1994, I was delighted to be asked to stay on the Program Committee, so Dave and I worked together in that capacity until I left that group in 2002. Over the years, I’ve also worked for Dave at numerous publications including Tom’s Hardware and Tom’s Guide, Digital Landing, and on various corporate projects of one kind or another. Now, I’m working for him again at RWW. In all fairness, I should also observe that I’ve hired Dave to work on projects with me from time to time, so that relationship is not all one-way, either. But Dave is a passionate and well-informed user and observer of information technology, and a long-time source of insight and information about the tools and industries that support IT. Check out his blog, his video product reviews, and learn more about his speaking business, if you like.