Thanks to widespread adoption of virtualization technologies and high-speed networking links to distant data centers, it’s not as hard to sit down to take a lab exam as it used to be. But big companies that do “performance based testing” or “lab exams” still often require candidates to travel to a limited number of lab testing centers worldwide (Cisco operates about half-a-dozen of them for the CCIE lab exams around the globe, for example). Red Hat is another performance based testing outfit whose hands-on exams for the RHCE and other of its credentials are pretty well known. But right now, it has teamed up with Innovative Exams to deliver what it calls “remotely proctored exam administration” for various Red Hat exams (here’s a video of the offering and set-up). 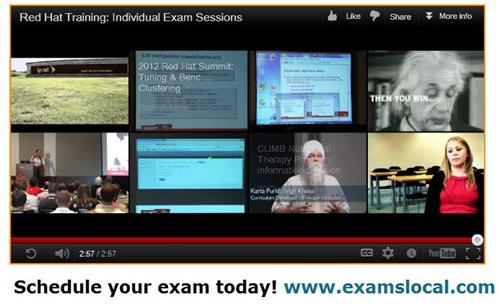 End of the reel for the Innovative Exams/Red Hat video

The concept works like this: a candidate schedules an exam session for a date of their choosing at an available test center location, and Innovative Exams provides a hardened and highly secure computer with a built-in scanner (to check their driver’s license or other photo against what the camera “sees” when the prospective candidate sits down). It includes a big screen display, mouse, and keyboard, plus the PC case (base station), and makes a remote connection to Red Hat Training and Certification staff who oversee and manage interaction with the exam candidate on the scheduled day and time.

This kind of approach is pretty interesting, and there’s actually no reason why other vendors can’t follow suit for those kinds of hands-on  exams that don’t actually require grabbing, installing, and configuring physical items of equipment. This could work very nicely for a great many performance-based or lab exams, including some from Microsoft, Check Point, Cisco, and others — Red Hat, too, obviously. But it’s unlikely to replace the CCIE lab exam any time soon, simply because it makes parsing a set of implementation or usage requirements, and then grabbing and configuring the right hardware to implement same, such a key part of its overall approach. Someday though, who knows? Nice idea!

[Thanks to Anne Martinez at GoCertify.com, whose 7/17/2012 Certification Watch alerted me to this new development in hands-on lab testing opportunities.]