The sun will come out to… charge your mobile

Smartphone technology has increased at such a rate that the phones of just 12 months ago look like relics. However, battery technology has failed to keep up with the pace and no matter how shiny our new phones are, batteries run out faster than ever.

It is of little consequence if you are able to plug in the charger at home or work, but when you are away from all your home comforts for five days in field, there is no hope for the smartphone to run the course – the battery WILL die.

Vodafone thinks it has come up with the answer. As festival season kicks off, the company has unveiled its latest product – the Vodafone Booster Brolly. Covered in solar panels, Vodafone users can plug their phones into the umbrella via USB and handsets will charge in just three hours.

On top of that, the brolly has a built in antenna to boost signal for the user and any other Vodafone customers nearby. 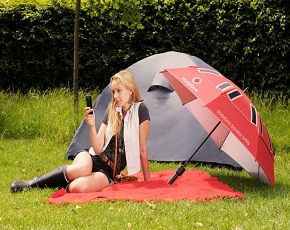 Here at Downtime we know about music festivals and after getting soaked in a field last weekend at Download with a phone bereft of battery, we sing the praises of this little invention! Now to get our hands on one before the Isle of Wight Festival in a couple of weeks…