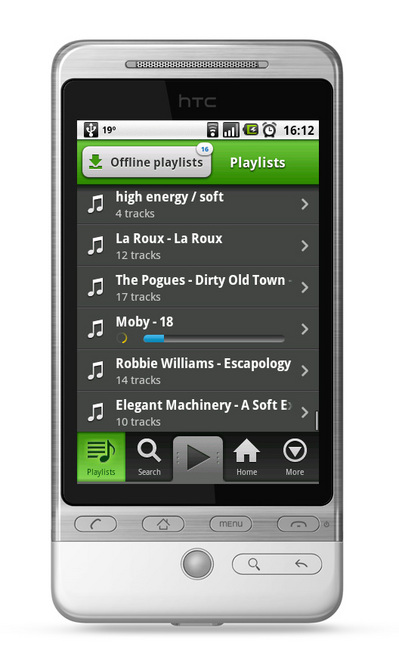 Spotify for Android. Please note: these are not my playlists… Robbie Williams. Bleurgh.

I love Spotify.  No one has paid me to say this.  Well, technically, someone has.  Someone will pay me for this entry – but I am free to say “Spotify is as rancid as an old plum that’s been stored for ten years in a tramp’s boot” if I want.  But I don’t want, because I love Spotify.

The famous streaming music app has completely changed the way I access and listen to music. And I do listen to music a lot.  From Vivaldi to Vampire Weekend and every stop in between.  Except Keane.  No one likes Keane.

While my collection has been partially digital since I picked up my first iPod from New York’s Apple shop in 2003, there have still been CDs.  Not anymore though. Spotify just made them redundant.

Of course, there are some notable artists you won’t find on Spotify yet. There’s no Pink Floyd or Peter Gabriel. There’s little Husker Du. The problem isn’t that those artists haven’t agreed to appear – it’s that deals have yet to be brokered with their labels.

But there’s still plenty to love about Spotify.  An easy to use interface that isn’t a slave to iTunes, support for Boolean searching, shared and collaborative playlists and streaming music that’s of perfectly listenable 160Kbps quality.

And, loving Spotify as I did, I thought the company had shot itself in the foot.  Its revenue model is based on two prongs.  The first; advertising interrupts your listening pleasure if you use the free version.  And, we have to admit, the advertising can be pretty annoying.  Especially when your carefully composed playlist of 70s German electro is interrupted by Robbie Williams honking out his new single. The second; you can trade up to Premium for £9.99 a month – or £119.88 a year.

A tenner a month sounds a bit steep – but if you’re a real music fan, it’s equivalent to a CD every 30 days or 10 tracks a month on iTunes.  Still, I was wondering – what true incentive is there to go Premium when Spotify’s already giving you so much for free?  And then I tried Spotify for Android.

Spotify’s mobile applications – Spotify for Android and Spotify for iPhone are beautifully designed music player apps in a mobile world overpopulated with appalling, thrown together twitch and flick interfaces.  Realising that screen real estate is at a premium, Spotify for Android packs all its functionality into four simple tabs in understated Spotify charcoal and green; Playlists, Search, Playback and Home.  The search page is actually better than in the desktop version of the app – enabling you to choose between title, artist or album with the click of a tab. And instead of flipping through a stack of bitmap thumbnails to find music, it’s all available in easy to navigate lists.  Goodbye, pretty but user-unfriendly cover-flow. Goodbye forever.

The mobile app is free to download – but there’s an apparent catch.  You need to be a Spotify Premium user.  After a few days carrying Spotify for Android around on an HTC Hero though, we’re failing to see the problem.  With unlimited data – bundled with many mobile contract packages these days – Spotify turns your handset into a digital music player with almost limitless capacity.  And, if 3G bandwidth is a problem, it’s easy to download playlists for offline listening.  You just click “Offline Playlists” and tick which ones you want to back up when you’ve got a WiFi connection. You can store up to 3333 tracks, which is, more than enough for a couple of week’s holiday off grid.

I’ve read other reviews of the mobile versions of Spotify and there’s one thing they don’t make clear enough.  Spotify for Android doesn’t cost £9.99 a month as some insinuate – it’s free with Spotify Premium.  You get Spotify Premium on your desktop and on your mobile for the same price.  That means no more adverts, 320kbps resolution, and offline listening on both your mobile phone and desktop computers.  Who needs to actually buy music anymore? If you’re Spotify savvy – not you.