It’s hot outside, so kick back and take it easy

My word, it's blooming boiling outside today in London (31 July). 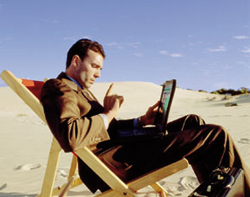 What fate will beset hacker Gary McKinnon now that he has lost his extradition appeal in the House of Lords today? If you want to hear what he thinks about the decision then

It's hot in London (BBC says its 26 degress Centigrade, but it feels more like 30 to me), so the good folk at Network Rail have developed a really sophisticated solution to the problems encountered by passengers trying to use the fast ticket machines outside the station.

iPhone mania – a video round up

Its time for some video fun... three iPhone videos to amuse you. Firstly, the obligatory will it blend?

END_OF_DOCUMENT_TOKEN_TO_BE_REPLACED

If you live in the West Country, you'll be able to see a documentary at 7-30pm tonight called  "West Eye View" on ITV. This film, called "Public Money, Private Gain" is the result of several months of work by a small team and is the story...

I enjoyed this post by the Daily Telegraph blogger Alex Singleton that Labour is like Microsoft. Do you agree that Microsoft is suffering the same reversal of fortunes as the Labour party?

What were you looking at last week?

Last week's most popular stories were topped by doom-and-gloom in the IT job market as loss-making Sun Microsystems cuts...

Kids of today will drive your IT in the future

JP, who has a very popular and well read blog, Confused of Calcutta, was talking to the CW 500 club about the future of corporate...

An Australian woman Olive Riley, who is believed to have been the world's oldest blogger, has died at the age of 108.

Oliver Riley was born in Broken Hill in New South Wales in 1899 and died just days ago in a nursing home in Woy Woy in NSW. Her last post on