Software is a multi-faceted thing.

Because of this core reality, we often talk about elements of software code as layers in a fabric, or indeed (to use a more literal term and one that proliferates in programming circles) as a collection of code components and ancillary services that form a stack.

Given the massive variety of choice that programmers now face when looking to populate their stack, the market for decision and product support services has been growing year-on-year.

A new company (founded in 2014) working to carve out a chunk of respect in this market is StackShare — a Silicon Valley-based software discovery platform that lets developers see all the best software tools and (crucially) see who’s using them.

This is essentially a developer-only community of engineers, CTOs and VPs designed and built to help developers share knowledge about the tools they use and why they use them.

StackShare is in some ways redolent of the work already carried out by StackOverflow, a question and answer site for professional and enthusiast programmers — and of course Spiceworks, a technology ‘marketplace’ and collaboration platform company.

This month sees StackShare introduce a Stack Decisions, a new service (tool) that lets developers post and browse short posts about why they chose a given suite of software tools to overcome a specific engineering challenge.

Developers can share a few sentences about the problem they faced and the technology they used to solve it, allowing for messages that are longer than Twitter and less time-intensive than a typical Medium post.

“As a founder, I know how difficult and time-consuming these large technical decisions can be,” said Yonas Beshawred, founder and CEO at StackShare. “With Stack Decisions, we’ve introduced a powerful platform for making smarter technology choices — helping our community get back to the hard work of solving the actual technical challenges they face each day.”

Stack Decisions is the latest step forward in StackShare’s pursuit of building the world’s first technology graph, a mission that netted a $5.2 million Series A round at the beginning of the year.

“We’re excited about Stack Decisions because it encourages developers to share their expertise and experiences, allowing for .NET developers to share their platform choices in to-the-point sentences, which helps other developers learn more about the language and framework features and extensibility,” said Maria Naggaga, senior programme manager at Microsoft. “As a member of the .NET team, Stack Decisions gives us the opportunity to see, learn and appreciate how our growing open source developer community is using .NET.”

The .NET community has already started sharing some of the most interesting technology decisions they’ve been making while utilising the .NET platform on StackShare. 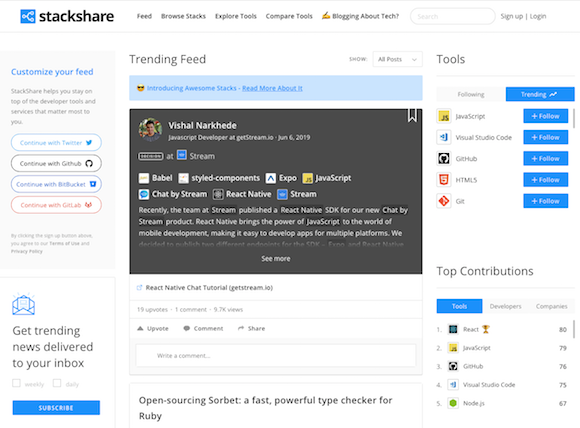