AppEngine follows Rackspace’s lead, barfs all over the place

Google’s vanguard platform service AppEngine has fallen down , hot on the heels of Rackspace’s storied hot mess on Monday

A Google spokesman, presumably Brett Slatkin, posted to the AppEngine Google Group about the outage saying the problems had started at approximately 6:30AM PST .

Very little is known about the infrastructure that underpins AppEngine, but entering “unplanned maintenance mode” and knocking your entire userbase off their data, especially when they have no alternative and no way to mitigate risk by using other platforms is certain to be a very low-level problem.

AppEngine is still in beta, like lots of other Google services, so they haven’t broken any promises, per se, but it’s hardly good PR. Google experienced a more major outage in May.

Rackspace recouped some of it’s sorely besmirched street cred by promptly and thoroughly communicating information about the outage, via Twitter, blogs and direct communication. It remains to been seen if Google will do the same. 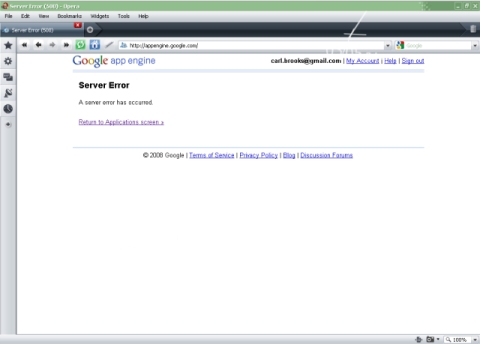