Looking ahead to AWS re:Invent 2017 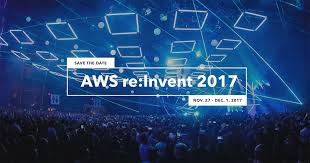 As we get closer to the annual AWS re:Invent event, it’s time for all of us prognosticators to speculate on what new products and services that AWS might announce.

What I’ve learned over the years is that their announcements tend to follow a few common rules:

So given all of that, what might we expect to be announced at re:Invent?

Enterprise Partnerships – The biggest revenues in IT are in the Enterprise, which has been AWS’ focus for the last 3-4 years. Expect to see them continue to highlight SI partnerships to help scale delivery. Expect them to highlight some new ways that they’ll create hybrid cloud environments (example: AWS Service Broker with Red Hat OpenShift).

Lots of Data and Lots of Lambda: CTO Werner Vogel’s keynote is supposedly going to focus on the intersection of data and serverless, two areas where AWS is extremely focused and two areas where their services are very sticky (read: much potential for lock-in to the AWS cloud). I expect to see many early-adopter customer stories and use-cases highlighted.

Going after “the old guard” – AWS likes to refer to large, existing IT vendors as “the old guard”. They favorite seems to be Oracle. They have bee aggressively trying to offer alternatives to the Oracle DB (e.g. Aurora), as well as database migration tools into the AWS cloud. They’ve also gone after Oracle data warehouses with AWS Redshift. I’d expect to see them begin to target AWS Lambda at edges of common Oracle DB capabilities (e.g. batch processing).

Containers – Containers have been a hot technology for the past 2-3 years. Many surveys show that customers are already running containers (e.g. docker) on AWS, along with homegrown Kubernetes clusters. AWS has a managed container service (AWS Elastic Container Service – ECS), but with the rising popularity of Kubernetes, I’d expect to see AWS offer a managed Kubernetes service to compete with Azure AKS and Google GKE.