Yesterday, computer users all over the world salivated in front of their computer screens, drooling over rare, previously forbidden images. What made this particular day special was that the photos in question were totally safe for work.

For the first time, Google opened the doors to its data centers, sharing pictures and video of these massive operations. Wired’s Steven Levy was among those who got an exclusive first look at one of the data centers (a behemoth of a building in Lenoir, North Carolina), and his resulting story is a great read.

What makes these images so compelling? For the average person, it’s a chance to unravel some of the mystery behind one of the world’s most powerful companies, and a reminder that for all the talk about cloud this and cloud that, the Internet is a real, physical thing.  Most IT pros have long internalized that truth, but still relish the chance to gawk at a super-sized version of the technologies they oversee on a daily basis. These are the technologies that run much of our lives, and so we can never have too much exposure to them.

Google’s doing plenty of interesting things in its data centers, from custom-built servers to energy-saving innovations (take that, New York Times). But it’s not the only company with an intriguing server story to tell; in the new book, The Art of the Data Center, Douglas Alger showcases 18 other data centers that  demonstrate impressive processing power and creativity, interviewing the people behind these modern landmarks (there are a ton of data center pictures, too).

In looking through the book, I was struck by the range of designs and approaches, which took into account things like geographic location (e.g., ACT’s tornado-resistant building in Iowa City) and history (the Lakeside Technology Center in a former Chicago printing plant). 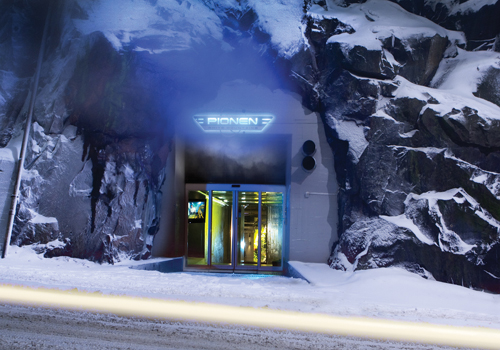 The entrance to the Bahnhof data center in Stockholm. Courtesy of Bahnhof/InformIT.

All the data centers featured are beautiful in their own way, but for sheer uniqueness, I’d have to give the prize to Bahnhof’s 10,000 square-foot space in a former nuclear bunker in Stockholm, Sweden (which includes a 687-gallon saltwater fish tank and two Maybach diesel submarine engines) and the Barcelona Supercomputing Center, built into a gorgeous 1920s chapel. Both are powerful reminders of how the world is constantly evolving, using old spaces to meet new demands. As for what the future looks like…that picture is still a little blurry.